What is Kindle Worlds?

Kindle Worlds is  a place for authors “to publish fan fiction inspired by popular books, shows, movies, comics, music, and games. With Kindle Worlds, you can write new stories based on featured Worlds” such as Russell Blake’s Jet World, Hugh Howey’s Silo Saga, Barry Eisler’s John Rain novels, Blake Crouch’s Wayward Pines series, and The Foreworld Saga by Neal Stephenson, just to name a few. Learn more about Kindle Worlds for Authors.  Readers…check out all the Kindle Worlds here.  At the moment, Kindle Worlds books are only available for sale on Amazon.com (US site only). 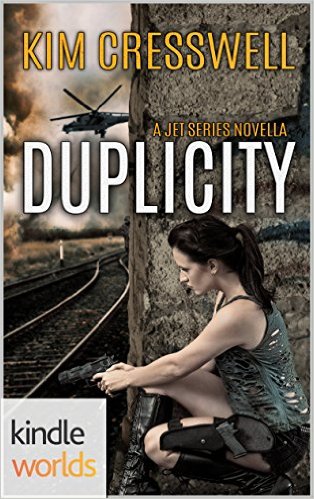 After eliminating an al Qaeda terrorist cell and destroying a dirty bomb in Colombia destined for the United States, JET, Mossad’s former deadliest operative is hidden half around the world in Bangkok finally living the life she’s always wanted with her daughter, Hannah.
But when a Russian troll farm wreaks havoc by circulating rumors that Jet and her team killed the leader of the Sur del Calle cartel, unexpected enemies surface and a past adversary with a thirst for revenge hunts down the team vying for the big payoff—kill JET.
Available exclusively at Amazon (US site only)

DUPLICITY  is the second book in the Survival Series and explores different genres. Action. Adventure. Thriller.  The story is set in Las Vegas, Bangkok, and Russia.  Las Vegas was chosen because it’s my two main characters (Hal Decker and Angela Donahue) usual stomping grounds. Bangkok was revisited because some of the stories in Russell Blake’s original JET series were set there.  It is a place where JET feels safe in my story–or at least she thinks she is. I also chose Russia because I’ve always been intrigued by troll farms, how they operate,  and how they choose the fake stories and propaganda to circulate.

Meet some of the characters from JET:  OBLIVION  and JET: DUPLICITY

“Known by her codename JET, Maya is Mossad’s deadliest operative. As beautiful as she is lethal, Maya possesses a colorful past—one littered with missions carried out in extreme prejudice. She’s faked her own death, found and lost love, and rediscovered the daughter who was stolen from her at birth. But with enemies all around the world, Maya’s future is uncertain and her past not fully revealed.”

Hal Decker and Angela Donahue are my two crossover characters. They were first introduced in RETRIBUTION (A Whitney Steel Novel – Book #2) and met during a covert mission in Colombia while Hal was helping a good friend save his fiancee after she was kidnapped by the drug cartel.

Hal is a former FBI agent, elite sniper and an ex-marine. He’s a mellow kind of guy with soft voice and has a serious vibe to him. People who meet him aren’t sure if he is friend or foe. He’s brilliant and cunning. He reminds me of a younger Ron Perlman playing the character Luther Braxton in the TV show; The Blacklist.

Angela is thirty-three years old and ex-US military intelligence (surveillance/reconnaissance) who worked intelligence operations in numerous overseas environments as well as in South and Central America. She’s also the go-to-girl you call to help get you out of a hostile territory during a dangerous mission. Her specialty—exit plans. She’s pretty good at kicking butt too.

I decided to use JET and Hannah from the original JET Series in  DUPLICITY. I wanted to show the softer side of JET as a mother forced to do whatever it takes to protect her child. I also wanted readers to see more of Hannah this time around.

The major theme in DUPLICITY is the will to survive. Whether it’s a character who is an alcoholic or a character who’s risking her life to stop a terrorist attack—in the end it’s all about survival. It’s also the main theme in my other works as well. My books all have very strong female leads who have to fight to survive one way or another.