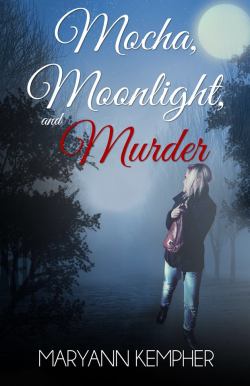 A midnight food run nearly gets Katherine O’Brian killed. She’s the only person to see the man who brutally murdered a local woman and the killer is hell-bent on making sure she doesn’t talk.

When Katherine meets Scott Mitchell; literally, tall, dark, and handsome, sparks fly, but despite their chemistry, both have their own reasons for wanting to stay “just friends”. When it becomes clear that Katherine’s life is in danger, they’ll work together to try to figure out what the police haven’t been able to—the identity of the killer, before Katherine becomes his next victim.

Scott and Katherine will face jealousy, misunderstandings, lust, and rivals, not to
mention attempted murder—and all before their first real date.

MaryAnn Kempher’s books will test your crime solving skills and tickle your funny bone; with quirky characters and witty dialogue, her books will keep you guessing, and smiling until the very end.
Her books can be read out of order, but she recommends you start with her first, Mocha, Moonlight, and Murder which is a romantic mystery set in Reno NV, then Forever Doomed, which is a murder mystery set on a cruise ship.
Sweet Mystery is her most recent release and another “I did not see that coming.” murder mystery.