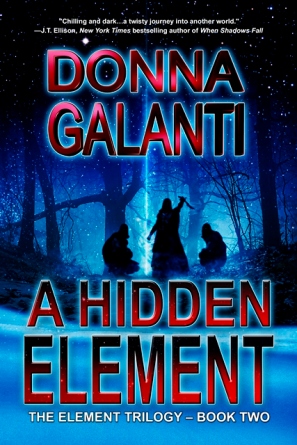 A HIDDEN ELEMENT: Book 2 in The Element Trilogy

Evil lurks within…
When Caleb Madroc is used against his will as part of his father’s plan to breed a secret community and infiltrate society with their unique powers, he vows to save his oppressed people and the two children kept from him. Seven years later, Laura and Ben Fieldstone’s son is abducted, and they are forced to trust a madman’s son who puts his life on the line to save them all. The enemy’s desire to own them—or destroy them—leads to a survival showdown. Laura and Ben must risk everything to defeat a new nemesis that wants to rule the world with their son, and Caleb may be their only hope—if he survives. But must he sacrifice what he most desires to do so?

PRAISE FOR A HIDDEN ELEMENT

EXCERPT
The baby was coming. Here. Now.
In this ancient, godless wood with the devil chasing her.
She staggered up the bank seeking refuge. She doubled over and fell to her knees. There. A curved bush with a den inside. She crawled on pine needles to her sanctuary, scratching her knees and stomach.
She fell on her side and curled up in pain. Daggers ripped through her.
Breathe. Breathe.
Charlie had come so fast. This one would, too. The pain subsided and she rolled onto her back, praying the killer stayed afar. Moonlight stabbed through the branches, exposing her. She pulled herself further into her wooded cave. A lone owl hooted above, announcing her hideaway. Laura darted her eyes back and forth from tree to tree, but the woods remained empty.
Pain grabbed her harder, tightened across her belly like a giant fist pounding into her. She scrambled in the dirt for a twig, in between gasps and grunts. She bit down hard on a stick, swallowing sour grit. Pressure pushed all around. And such pain. She held her legs up, from underneath, widening the way for her child. She felt his head between her legs, pulsing to get out. Not here. Not now. Oh God, help me.
Then a laugh cut across her hell. 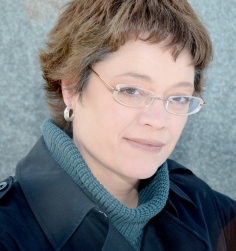 Donna Galanti writes murder and mystery with a dash of steam as well as middle grade adventure fiction. She is the author of books 1 and 2 in the paranormal suspense Element Trilogy, A Human Element and A Hidden Element, the short story collection The Dark Inside, and Joshua and The Lightning Road (Books 1 and 2, 2015). She’s lived from England as a child, to Hawaii as a U.S. Navy photographer. She now lives in Pennsylvania with her family in an old farmhouse. It has lots of writing nooks, fireplaces, and stink bugs, but she’s still wishing for a castle again—preferably with ghosts.
Website
Blog
Twitter
Facebook
Goodreads