Join Kim Cresswell – author of  DEADLY SHADOW (The Assassin Chronicles) on Friday, September. 7th at 2:00 PM Eastern on Reddit!  AMA (Ask my anything)!

I am Kim Cresswell and I kill characters. AMA.

I am an author of thrillers and true crime. My novels include Deadly Shadow, the first book in the new paranormal/supernatural thriller series: The Assassin Chronicles, the RWA (Romance Writers of America) award-winning Whitney Steel romantic thriller series: Reflection, Retribution, and Resurrect, and the True Crime Quickie short story series.

Some of my books have been translated into various other languages. The Whitney Steel series will be published in German (2018/2019) in a 3-book translation deal with Luzifer Verlag.

I am a legal assistant, script writer, community volunteer, lover of books, movies, animals, and everything paranormal. I live in Ontario, Canada with the Queen of all Cats, Miss Roo. Ask me anything.

Available at Amazon
Free to read with KindleUnlimited

“For as intriguing and raw as each page is, nothing, and I mean nothing, prepared me for that sledgehammer ending. Emotions will be electrically charged, feel the hatred, the terror and the determination of one woman to serve justice, one way or another.” – Dianne, Tome Tender Book Blog (read the full review here)

Summer is just around the corner! Time for a fantastic giveaway!  Good luck!

Thanks to this fabulous group of authors you have the chance to win $250!

Open only to those who can legally enter, receive and use money sent via Paypal or gift codes via Amazon.com. Winning Entry will be verified prior to prize being awarded. No purchase necessary. You must be 18 or older to enter or have your parent enter for you. The winner will be chosen by rafflecopter and announced here as well as emailed and will have 48 hours to respond or a new winner will be chosen. This giveaway is in no way associated with Facebook, Twitter, Rafflecopter or any other entity unless otherwise specified. The number of eligible entries received determines the odds of winning. This giveaway was organized by Kathy from I Am A Reader and sponsored by the authors, bloggers, and publishers on the sponsor list. VOID WHERE PROHIBITED BY LAW.

I’m thrilled to announce that Deadly Shadow (The Assassin Chronicles – Book 1) is one of ten books selected as the Best of Spring Reading 2018. A couple news outlets including FOX and NBC picked up the reading list.

The Assassin Chronicles TV series is in development with Council Tree Productions.

Deadly Shadow (The Assassin Chronicles – Book 1) releases on May 11th. 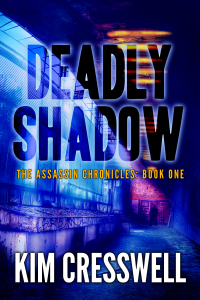 As the body count rises, Victory must cross a dangerous line–into a world of government cover-ups, murder, and betrayal–a decision that will test her limits. And everything she believes in

DEADLY SHADOW (The Assassin Chronicles – Book One) is now available to pre-order at Amazon! Ebook and paperback release date: May 11th

As the body count rises, Victory must cross a dangerous line–into a world of government cover-ups, murder, and betrayal–a decision that will test her limits. And everything she believes in.

The battle between good and evil begins! Deadly Shadow is the first book in the gripping paranormal/supernatural thriller series, an action-packed blend of suspense and mystery for detective and crime book lovers.

Check out my interview with Nicholas Yanes at Scifipulse! 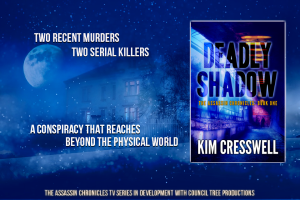 Watch the Deadly Shadow (The Assassin Chronicles – Book One) Teaser

As the body count rises, Victory must cross a dangerous line—into a world of government cover-ups, murder, and betrayal—a decision that will test her limits. And everything she believes in.

**The Assassin Chronicles TV series is presently in development with Council Tree Productions.**

Click here to be notified when Deadly Shadow is available for purchase. Subscribe to my newsletter and stay up-to-date!

I’m thrilled to announce that I’ve signed a contract with writer/producer Joel Eisenberg and  Council Tree Productions (a feature film and TV development company in Los Angeles, California) for THE ASSASSIN CHRONICLES.

Hillard, President of private equity investment firm Council Tree Investors, has invested in and advised on transactions totaling over $10 billion, including control of Telemundo, for which his company invested $181 million in 2000, and numerous major telecom transactions.

“Joel’s and my own interests are perfectly aligned within several media genres,” Hillard says. “We met at a Los Angeles pitch festival and I pitched him my novel, ‘Mirkwood.’ We became friends and then business partners due to our mutual interests, especially in the realm of fantasy.”

As writers, Stephen and Joel are currently writing the multi-volume “The Chronicles of Ara” fantasy novels. As producers, they are developing “Farway Canyon,” with Anthony (“Sharknado”) Ferrante directing, based on Hillard’s new comic book series with Dennis Nowlan.

“Cable and streaming services are presenting remarkable opportunities of late,” Eisenberg says, whose “Then Again with Herbie J Pilato” classic TV talkfest, executive produced with Hillard, is tentatively airing later this year on Decades Network. “A more formal partnership with Stephen was a natural progression.”

Priority projects on the team’s development slate include “IRL,” which is described as an LGBTQ-themed cross of “The Leftovers” and “The Walking Dead,” “Shadow Show,” as “hosted” by Vincent Price (of whom the company has attained likeness rights from the late actor’s daughter, Victoria) – a re-branding of Sam Weller and Mort Castle’s bestselling anthology and IDW comic book series – and the aforementioned “Farway Canyon.”

The partners maintain their separate projects as well. “Louis vs Schmeling,” based on one of boxing’s most historic rivalries, is forthcoming from co-writers Eisenberg and Gil Adler (producer of “Superman Returns” and “Valkyrie”), with Bill Duke directing…”

The Assassin Chronicles is based on my upcoming 4-book paranormal/supernatural thriller series (Deadly Shadow (Book One), Assassin’s Prophecy, Invisible Truth, and Vision of Fire). Even though this is only the first step in seeing this kickass project hopefully developed for television down the road…the journey has begun.  Stay tuned!

Verliege, a chilling paranormal and international crime mystery, begins at Arlette Mansion in the mountains of West Virginia. Prisoner and author Adrian Bolt was transferred there accused of the horrific murder of his wife. She was found brutally murdered by an antique sword. His conviction by a German court was as swift as the sword that killed her. Adrian had not spoken since her death …until… Dr. James Pellitere was able to break his silence.

A deal was offered to Pellitere. Traveling to Germany with a paranormal investigative team they searched for evidence that would clear Adrian and prove him innocent. While at the castle, Pellitere is confronted by the supernatural residents. A battle begins over the secret of the nine and a prophecy is in jeopardy of becoming unfulfilled.

“I was reminded of Gilman’s “The Yellow Wallpaper” (1892) and William Hope Hodgson’s accounting of the final voyage of the Mortzestus (1909), and the telling of Lovecraft’s “The Statement of Randolph Carter” (1919). Such is the narrative of this in comparison with these types of confessional stories. Like Gilman, Hodgson, and Lovecraft, the richness of dialog is not lacking in Rivers’s prose. The creatures of Verliege have some similarities with Tim Powers’s nephilim in The Stress of Her Regard, but without the vampiric tendencies. I hope the reader realizes that I am tossing out these comparisons to illustrate the depth of craft honed in Verliege. Rivers does not so much stand upon the shoulders of of these giants as he rubs elbows with them.”
– Amy K. Marshall, Staff Reviewer, Dark River Press 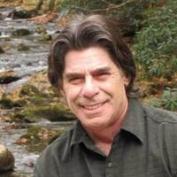 BESTSELLING PARANORMAL THRILLER AUTHOR MICHEAL RIVERS won 1st Place Runner up at The Paranormal Awards 2014 and has won Supernatural Book of the Year 2012.

Micheal Rivers is the pseudonym for Mike Baugham. His Cherokee heritage prompted him to honor his great-grandfather and write under the name of Rivers. He grew up near the Outer Banks of North Carolina. His love of the sea and all it has to offer was the driving force of his first novel The Black Witch. As a child, he became aware of the supernatural world due to several experiences. A recognized authority as a paranormal investigator with more than thirty years of research, teaching classes and giving speeches provides his readers with some of his experiences woven into his paranormal thrillers. He is the lead investigator for the Smokey Mountain Ghost Trackers.

His works include supernatural thrillers, literary fiction and ghost story anthologies published by Schiffer Publishing. Micheal is a USMC veteran and served during Vietnam. The passions in his life are his wife, family, Boxer Delilah affectionately known as DeeDee, and the great outdoors. 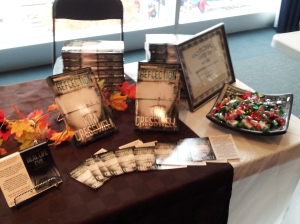 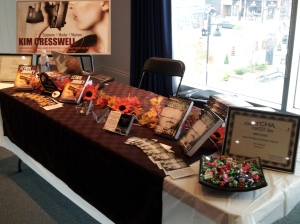 If you enjoyed REFLECTION…Whitney Steel is back!

TBA – Watch for an exclusive excerpt from RETRIBUTION (A Whitney Steel Novel) coming soon!  Blake and Whitney’s story isn’t over yet!

THE WAR HAS JUST BEGUN…

Once the top leader of the Sur del Calle cartel, Colombia’s largest drug trafficking organization, Pablo Sanchez has declared revenge against Blake Barnett, the FBI agent who’d killed his twin brother over a decade ago.

After one failed attempt forced him to flee the United States, Pablo has a bold new plan and he’s even more determined to kill Blake and his fiancée, Whitney Steel.

From Las Vegas to the militant infected jungles of Bogota, Blake has no choice but to risk his life and infiltrate the cartel’s inner world and eliminate the ruthless drug lord.

But the price of failure is higher than ever as he’s forced to use the woman he loves as a pawn in a deadly game—where the events of the past and present collide.

Coming in 2015! DEADLY SHADOW – the first book of an exciting new paranormal/supernatural thriller series featuring FBI Agent Victory McClane, Derrick Lynn – a 3rd generation government assassin, and a villain who will shock even the most unflinching readers!

Subscribe to my newsletter and keep updated on new releases, contests and so much more!