ICEHAVEN (Sum of all Tears – Book1) is now available at Audible narrated by Jennifer Swanepoel. 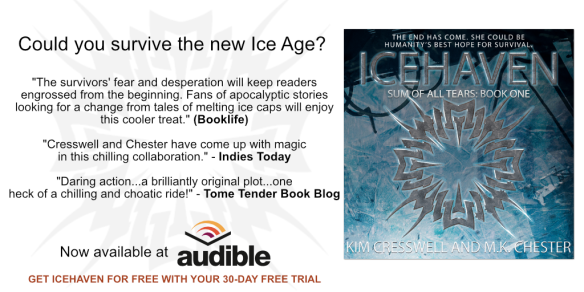 Coming soon to Amazon and iTunes.

I am absolutely thrilled to have received this wonderful review from Publishers Weekly for ICEHAVEN (Sum of all Tears – Book 1)! 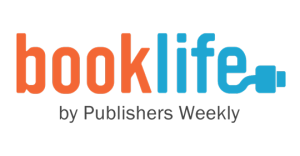 “Crime writer Cresswell (Deadly Shadow) and romance author Chester (Tied Together) successfully step into the postapocalyptic genre with this tale of good intentions and terrible results. August Madison is in the audience for the unveiling of her father’s technology to fix Earth’s warming climate when the auditorium comes crashing down on her. When she next opens her eyes, she sees nothing but snow and ice. Soon she learns that she’s somehow come back to life several weeks after the disaster—and that her father’s intended climate repair has instead turned the entire planet to frozen tundra. With new friends, she fights to survive, battling both the weather and other factions looking for supplies. Meanwhile, Coast Guard cadet Brandon Church, a childhood friend of August’s, is stranded with his crew and their fortunately well-stocked ship in the middle of the frozen ocean. They’re rescued by financier Graysen Marx, who helped fund the cooling project, and taken to Liberty, a prototype biodome Graysen created that’s now the only chance of survival on Earth. August and her crew eventually make their way to Liberty, hoping to find peace and safety there, but power goes to Graysen’s head, leading him to make deadly choices. The survivors’ fear and desperation will keep readers engrossed from the beginning. Fans of apocalyptic stories looking for a change from tales of melting ice caps will enjoy this cooler treat.” (BookLife)

ICEHAVEN is now available to read for FREE with your Kindle Unlimited subscription!

Books and Such
Quills & Inkblotts